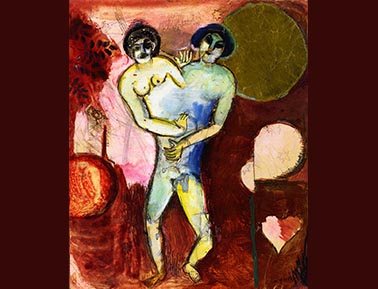 In 1911 Chagall was in Paris and twenty-four years old. Cubism was the new dominant art form. His first supporters in Paris were poets such as Blaise Cendrars and Guillaume Apollinaire. Chagall’s his own personal visual language of symbols— animal/human hybrids and airborne phantoms—would later become a formative influence on Apollinaire’s Surrealism.
Chagall did several paintings called Hommage à Apollinaire and this gouache is a study for those subsequent paintings. In this study the two figures are clearly taken from the Bible story of the creation of Eve from the flank of Adam but in those later paintings almost every trace of the biblical story has been erased and the two figures come to represent a tearing apart of oneness, the creation of opposites.