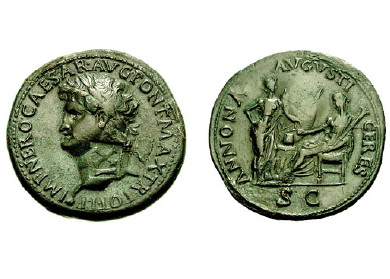 Roman emperors used coins as an important means of disseminating their image throughout the empire. The reverse images were often used to promote the exaulted status of the emperor or to celebrate a victory or, like this coin, claim a popular service for the common people. The reverse side of this coin shows Annona, the personification of the grain supply, and Ceres, whose temple was the site of the dole, a government program which gave out free or subsidized grain, and later bread, to the poorest residents of the city of Rome.