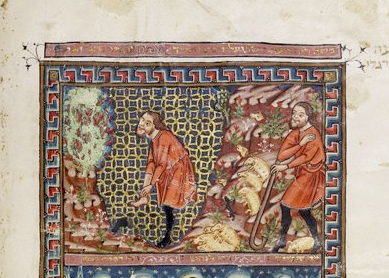 This miniature image of Moses and the burning bush is a section of a page taken from the Rylands Haggadah, an illuminated manuscript created in the mid-14th century in Spain. It is considered to be a masterpiece of medieval art. The Hebrew word haggadah means “telling,” and a Jewish Haggadah, used at a Passover seder, tells the story of the flight of the Jews from Egypt as recounted in the book of Exodus.

In the narrative of the burning bush, Moses is tending his sheep when he sees a fire coming from a bush. When Moses approaches the flame, he hears the voice of God, which instructs him to go to the pharaoh and demand permission to lead the Israelites out of slavery in the land of Egypt.